At the age of eight, Leon Portz was gradually losing his eyesight due to a congenital condition when he was given his first computer. By the age of nine, he had figured out how to speed up the machine-generated voice that read out websites and other electronic texts, allowing him to grasp the information faster. He now listens to texts at five times the standard speed, which is unintelligible to an untrained ear.

But his love of science only truly flourished when he moved from his hometown in central Germany to the nearby town of Marburg, a leafy, medieval university town, to attend a specialist school for the blind. As it turned out, that move transported him into a hotbed of inclusive innovation.

Marburg proudly calls itself a “Blindenstadt”, a city for blind and visually impaired people, due to its long history as a hub for accessibility. A ground-breaking educational institute for the blind, the Blindenstudienanstalt (or Blista) in German, was founded here during World War One, to provide opportunities for young men blinded in the war. The institute has spawned countless inventions for blind people since then, including a tactile mathematical font. It has also profoundly shaped the town around it, turning it into a place where, as Portz puts it, “everything is ideal for blind people”.

Some of the innovations that make Marburg so accessible also exist elsewhere. But the way they are joined up here is unique, Portz and other blind people who have lived in the town say. The clattering sound of guiding canes is ubiquitous in Marburg, as blind people navigate the town aided by beeping traffic lights, pavements and floors with ridges and bumps that act as tactile signals of hazards or barriers. Buildings often have raised maps and floor plans, while detailed miniature bronze models of major sights such as Marburg’s castle and town square allow blind visitors to feel the entirety of each landmark.

Other convenient features are a result of the town’s natural shape. Marburg is small and hilly, making it easy to orient yourself simply by noting if you are going up- or downhill. A web of accessible leisure facilities spans the city, such as a horse-riding school for the blind, and blind rowing, football, climbing and skiing clubs. The town’s university has Germany’s highest proportion of blind students, and the widest range of degrees taken by blind people. 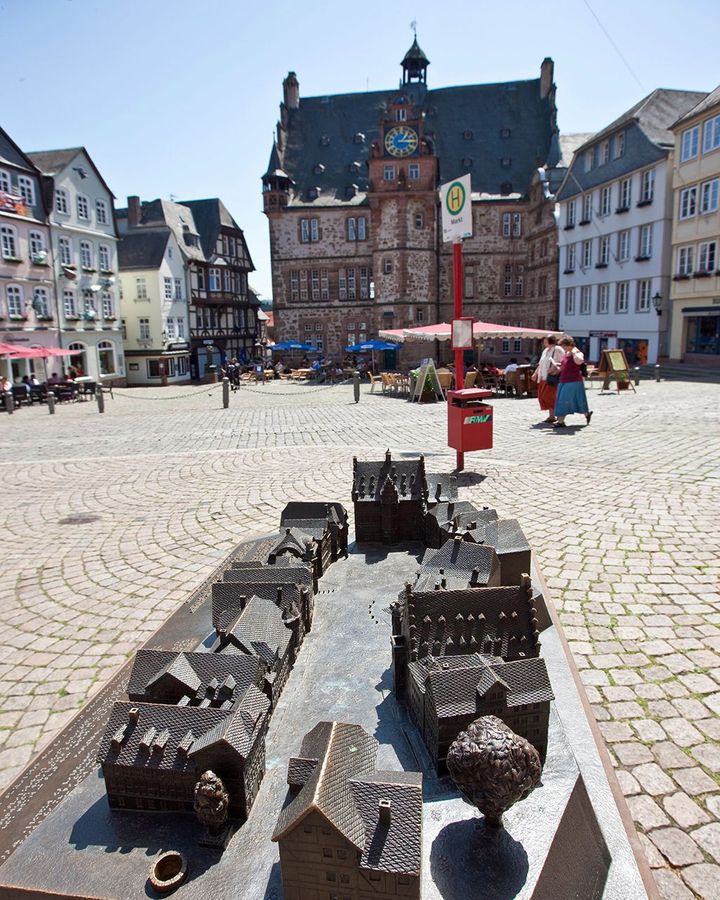 Many landmarks around the city have detailed scale models for partially sighted visitors to feel their way around (Credit: Alamy)

The Blista and its students have driven many of these innovations, developing everyday aids such as a foldable cane, but also, working with the university to improve accessibility across departments. Law and psychology are among the most popular course choices, as the materials are text-heavy and can be studied easily with aids such as screen readers. Now teachers and pupils from the institute are prising open another field: the natural sciences, which have long been beset by barriers for blind people.

“I don’t feel like a pioneer, but I guess I am one,” says Portz, who is studying biochemistry and computer science in Düsseldorf. He is the first blind biochemistry student there, and by his own estimate, one of fewer than a handful of blind chemistry students in all of Germany.

Chemistry remains relatively closed to the blind, due to the hazards of laboratory work, and the ubiquity of images, charts and graphs. But chemistry teacher Tobias Mahnke, who taught Portz at the Blista-associated Carl-Strehl-School in Marburg, argues there is no reason why his subject should be so restricted.

Mahnke, who is sighted, started working at the school in 2013. At the time, it didn’t offer an advanced chemistry class. Since then, he and his colleagues have developed an array of multi-sensory tools and methods for teaching natural sciences, supported by the chemistry faculty at Philipps University in Marburg, as well as funding from the charitable Reinhard-Frank-Foundation. Mahnke has written a master’s thesis on developing inclusive materials for teaching chemistry, and published some of his findings.

Unlike conventional science models used in classrooms, the Blista models are designed to reveal entire processes and wide-ranging relationships. For example, a three-dimensional model of a water molecule, developed by a group of chemists at different universities, can be squashed flat, to encourage students to think about how it is depicted in two dimensions. A 3D-printed plastic model of a curving river bed, developed by Mahnke’s colleague Tanja Schapat, is intended to be held under a tap. Students can feel where the water flows faster or slower, and how this shapes its contours. They then learn that where the bed is flatter, the water is shallower and therefore gets warmer in the sun, attracting fish and reeds.

The laboratory is adapted to blind pupils’ needs, with electric burners in perforated metal cases, instead of Bunsen burners with naked flames

“Most scientific experiments go far beyond seeing. You can touch things, something becomes warm or cold, you can smell and hear things, and in experiments with food, taste them,” says Mahnke as he shows the models via video. “In regular teaching, we focus on vision because it means I can demonstrate an experiment within five seconds, and it can be seen by 30 students. It’s fast and efficient for the teacher, but not for the pupils.”

In 2017, the school offered its first advanced chemistry course, and in 2019, demand was so strong that it offered two classes. The laboratory is adapted to blind pupils’ needs, with electric burners in perforated metal cases, instead of bunsen burners with naked flames. Mahnke and his colleague Tanja Schapat have developed a method for teaching pupils about heat and fire, using heat-sensitive swelling paper to allow them to explore the properties of a burning candle. A special sensor, developed at the school in the 1990s, emits a high or low beep when a liquid brightens or darkens during a chemical reaction.

During the pandemic, Mahnke taught students about the Covid-19 infection curve using raised charts printed on swelling paper. When the school closed to stop the spread of the virus, teachers posted models to home-schooling students. Each model is tested by pupils at the school, further refined with their input, and produced in the school’s in-house workshop.

In recent years, the Carl-Strehl-School has started accepting a limited number of sighted children, who learn alongside their blind classmates using multisensory materials, which in their case also incorporate sight. Research has shown that children and adults learn better when they can grasp new information with multiple senses, and not just visually. Mahnke says in his own experience, “multi-sensory experiences lead to much deeper and longer-lasting learning”.

For Portz, it was not just the school that broadened his world. He fondly recalls moving around Marburg with confidence, assisted by beeping traffic lights, talking bus stops, and a sighted population very used to interacting with the blind. Bus drivers in Marburg are trained to stop to give blind passengers easy access, shop assistants routinely deal with blind customers, and many restaurants offer menus in Braille script. He’s encountered some of these elements in other cities, but never in the form of such a comprehensive web.

“In Marburg, all these individual elements are very well-connected, and there are few gaps,” he says. “It’s also the mentality in Marburg. There’s the Blista, and many stay on to study at the university, so there are many blind people, and every institution is confronted with that, sooner or later.” 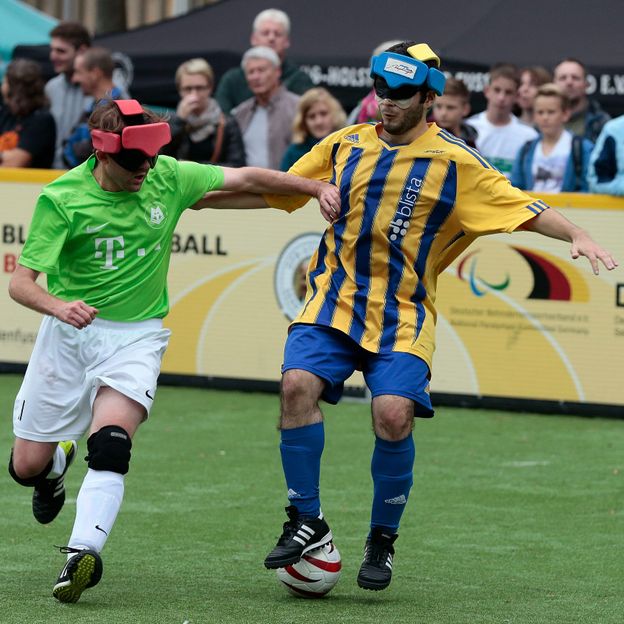 Uwe Boysen is a retired blind judge and former president of Germany’s association of blind and visually impaired students and professionals, the DVBS, which was founded in Marburg. He attended the Carl-Strehl-School and then studied law in Marburg in the late 1960s. In his opinion, the sense of community and self-help that has evolved in Marburg plays a crucial part in sparking innovation: “It gives you courage, it makes you dare to try out new things.”

That self-help spirit shaped Boysen’s own educational path. Professional opportunities for blind people were more limited when he was a student, though he estimates there were about the same number of blind judges in Germany as there are today, over 100, also because of the war blind. He and his blind peers invented many aids on the fly, swapping recorded tapes of their textbooks, and later, using their legal skills to campaign for more rights.

Bahaddin Batmaz, a blind software developer and accessibility trainer in Marburg, argues that many of its accessible features hold important lessons for innovation as a whole. One is that good design benefits everyone. He gives the example of the talking bus stops, which announce the next bus and its destination when a button is pressed. In his experience, many sighted people find this function convenient, too. Similarly, when he makes a website more accessible to screen readers, its search ranking usually jumps as well, because the underlying technology is the same.

“Linking together technological innovations, and the human and social factor, is hugely beneficial,” he says. “If you’re not constantly wondering how to cross the road, you’re less stressed. You’re not already totally overwhelmed by this stupid road, and then you’re also more open for innovation, and more accepting of others.”

Dago Schelin, a sighted filmmaker and media studies researcher at the Philipps University, comes to a similar conclusion in a case study of Marburg as a model for inclusive innovation. He and his co-authors describe it as a “smart city for the blind”, and argue that “Marburg appears to specialise in an alternative mode of smartness”. Instead of revolving around digital technologies, this type of smartness is more human-oriented. It centres on supportive interactions between differently abled people, and on accessible institutions. Schelin and his co-authors suggest that Marburg might become “a reference for prospective smart cities”, with accessibility perhaps becoming “one of the criteria for a city’s smartness status.”

Schelin, who is from Brazil, experienced this innovation-boosting effect himself when he moved to Marburg in 2014. He met blind people interested in filmmaking, and developed multisensory methods for teaching them. “It strengthened my notion that filmmaking is a community effort,” he says.

Leonore Dreves, a blind software developer in Heppstadt in southern Germany, leads the science, technology, engineering and mathematics sub-group of the DVBS professional association. Most members of the group work in information technology, a comparatively accessible sector. But even there, too many digital barriers remain, according to Dreves. Changing human attitudes is also part of the challenge: “I think the most difficult barriers are the ones in people’s heads. In my own case, as a woman and blind person, I had to prove myself for a long time before my colleagues accepted that I can do it just as well as them.”

Around the world, blind innovators are slowly dismantling some of those barriers. The chemist Mona Minkara is designing an inclusive STEM curriculum, the computer scientist Chieko Asakawa is developing accessible artificial intelligence, and the astronomer Wanda Díaz-Merced is using sound to study space, to name just some.

In Düsseldorf, Portz continues to work on making his own environment more accessible. Sighted friends help him with his image-heavy textbooks, describing charts and pictures. During the pandemic-related university closures, he listened to his recorded lectures at double speed, slowing down for the more complex bits. He still discusses new ideas for science materials with his former teacher, Mahnke, and continues to feel inspired by his old school. “It gave me a super strong push,” he recalls of his time there. “I realised what was possible, and what can be made possible.”

Processing…
Success! You're on the list.
Whoops! There was an error and we couldn't process your subscription. Please reload the page and try again.